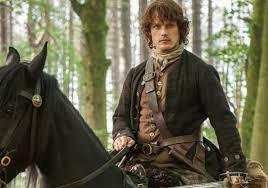 Ah, Outlander. With the sudden explosion of the Starz television series starring the ethereal beauty Caitriona Balfe and the swoon-worthy Sam Heughan (sigh), the Highland historical romance genre is well poised to rake in some major popularity points. Just thinking of the throaty way that man says the word Sassenach … oh, swoon and swoon some more!

For me, Gaelic has been an interest long before I picked up my (now well-thumbed) copy of Outlander by Diana Gabaldon for the first time in the summer of 2001. I’ve been in love with this beautiful, mysterious (and maddeningly difficult to master) language for a long, long time. With the strong Irish roots of my country’s east coast, Irish Gaelic has a special place in the hearts of Canadians from east to west. That doesn’t necessarily mean we know how to pronounce anything, though.

An anecdote to illustrate that point. About ten years ago, I went to see a popular east coast band in concert, Great Big Sea. Opening for GBS that night was Newfoundland-born pop singer Damhnait Doyle. From my past diggings into the Gaelic language, I happened to know that “mh” together makes a “v” sound. Thus, one pronounces her name “Dav-nit.” And I tell ya, I spent a good portion of the night snickering every time a friend in our group called her Damnit Doyle, as casually as if he were saying the name “John” or “Ted” or “Susan.”

Any Highlander story worth its salt has at least some Gaelic in it. But the challenge with Gaelic is that, even though it has a highly predictable pronunciation structure, that structure is so different than what English speakers find natural that it’s difficult to guess at without significant study of the language. Case in point, before the Starz Outlander series told us it was “Leery,” it was anyone’s guess how to say Laoghaire.

The difficulty in writing a Highland historical novel, or any novel that introduces a foreign or imaginary language (think Lord of the Rings), is providing your readers with the proper pronunciation of words they might not be familiar with. What is the best way to do that?

My suggestion is: don’t put the proper pronunciation in brackets. I came across a book recently that did this. It was set in the Welsh village of Abergavenny, beside which name the author wrote (Aber-uh-vennie). This option can be offputting to the reader for two reasons. First, you’re trying to pull them into a world in which they don’t currently live. It’s counterproductive to then remind them they’re not a part of this world by breaking up your manuscript with pronunciation lessons. Secondly, you may be offending them if they did know how to pronounce the word in the first place by presuming to spell it out for them. Literally.

It’s far better to try and introduce a scenario in which the pronunciation of a word is part of the story. Diana Gabaldon does this when Claire, in a passage of narration, considers the way Jamie says Laoghaire. I’ve done this myself, too. In my latest manuscript, my English heroine stumbles with the correct Gaelic pronunciation of the name Tearlach. To clear things up for readers, I worked it into the dialogue that the character of Tearlach takes pity on my heroine, and invites her to call him Charlie. “It’s close enough,” he tells her, “and besides, my Lady, Tearlach is the Gaelic for Charles.”

Of course, there are times when you just won’t be able to give pronunciation to your readers in any natural way. When faced with this, I’m of the belief that it’s better to simply let your readers guess. If they’re curious enough, they’ll take the time to look it up. But just like you can’t overdescribe a character, and have to leave it to your readers to form their own picture, you sometimes have to let them find a way to pronounce unfamiliar words without your guidance. Even if the pronunciation they come up with is not what you imagined.

6 thoughts on “Outlander: A Case Study in Writing Word Pronunciation”