I was going to write a post about inspiration today. It was going to be full of tips from top writers about how they find inspiration for their work, and suggestions for how you can keep yours as you complete your work in progress. After doing a whole bunch of research, and coming across tons of suggestions that were, quite frankly, rather generic and of little actual help, I realized … I was absolutely not inspired to write this post at all.

It was in sourcing all these tips and tricks that I decided the word inspiration is misleading. By definition, it’s the process of being mentally stimulated to do or feel something, especially to do something creative. Too often, though, we use it the way we use the word “inspired”, which has a different connotation. If something is inspired, it is of extraordinary quality, as if arising from some external creative impulse. 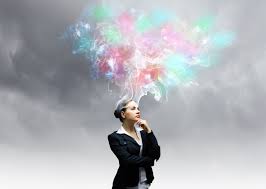 The idea of inspiration as something divine is a romantic notion. So is Happily-Ever-After. The truth is that it takes a lot of hard graft to make it to Happily-Ever-After, just like it takes a lot of hard graft to get your novel done. Hanging onto the idea that you need inspiration in order to write is as damaging to the creative process as the idea that after you find the love of your life it will all turn out perfectly is to longevity in marriage.

This is why many writers — especially new writers — have so many unfinished novels. One story gets started only to be abandoned because the author just wasn’t feeling it. In the end, there’s a graveyard of undeveloped stories, lost to the need for inspiration. And I am totally not above putting my hand up on that score!

Inspiration is like Prince Charming. His fictitious ass is not going to gallop by on his white steed and pull your damsel-in-distress-self from the mire of “I’m just not feeling this one.”

Believe it or not, that was pretty close to the pep talk I gave myself when I first started freelancing. I quickly realized that because I’d made a written agreement with my editor, that I’d been given a deadline and that I’d submitted a plot outline, I didn’t have the luxury of giving that piece up. The entity paying my cheque couldn’t give a damn if I “wasn’t feeling it.” I had to slog it out whether inspiration found me or not. Usually it was “not.”

That experience served me well in the end, though. It taught me that finishing my own novel would be just as hard. It also taught me that all I had to do was pick a plot and stick to it. I had to put the effort in to get that plot from start to finish. And inspiration had very little, if anything, to do with whether or not I succeeded.

So let’s forget about inspiration. Let’s put it away in the same place Disney put the Prince Charming archetype when they realized modern women liked the heroine who could save herself better. Inspiration is overrated. If you want to get your manuscript across the finish line, there are far better pieces of advice out there than what I found when I Googled “how to stay inspired as a writer.” Here are my top three:

Award-winning novelist Elizabeth Sims, in her article “How to Develop Any Idea Into a Great Story,” argues that “It’s not hard to get inspired by a great concept, to take it to your table or toolshed or cellar and do some brainstorming, and even to start putting the story on paper — but eventually, many of us lose traction. Why? Because development doesn’t happen on its own.”

It’s probably appropriate for this piece of advice to be in here, considering it’s the last day of NaNoWriMo. The annual writing challenge that has authors everywhere scribbling their little hearts out says that you can finish a 50,000 word novel in a month. Notable word here is finish. With a daily average word count of 1,667, those who have accepted the challenge don’t have time to go back and start playing around with what they already wrote. And they certainly don’t have time to sit back and wait for inspiration to come knocking.

In a guest post on Writers Helping Writers, author Kelly Miller writes, “To avoid getting stuck in the middle of your story, stop looking back. Accept that your first draft will be crap. It’s meant to be; it’s inevitable. If you keep going back trying to perfect your earlier chapters, you’ll lose the flow of where your story is headed.”

Writing is a habit. Whether you write every day, write at the same time every day, write in the same place every day … you have to write regularly. If you do this, your novel will gain momentum. The “inspiration” (note quotes) will find you because you’re making it happen. Or, probably a better way to say it is that you’re grabbing inspiration by the [insert vulgar description of your choice here] and stuffing it into your manuscript whether it wants to be there or not.

Novelist Chuck Wendig points out that “Writing is contagious madness a lot of the time. Even when it sucks, you wanna do it. And that, I think, is one of the things that separates the Aspiring Not-Really-Writers from the Really Real Writers — the latter group writes even when it’s hard, even when the motivation is a dry well, even when the inspiration seems like a dead or dying thing … Every day is an act of revivifying your own abilities and motivations … momentum begets momentum.”

Inspiration can be a dangerous word if we use it as an excuse not to write. For new writers especially, those that have aspirations of completing their first novel, it can be detrimental. Writers who have been in the game for a while know that abandoning a story is not an option. You only have so many of those ideas floating around up there, and not a single one of them is The Perfect One. They’re all good in their own way. Raw around the edges? Sure. Disjointed? Absolutely. But none of that matters. Give inspiration the old heave-ho, pick an idea, and get down to making it happen.

As Jack London famously said, “You can’t wait for inspiration. You have to go after it with a club.”

How do you stay motivated to write? Does inspiration find you or do you find it? What was it that finally got you to finish your first manuscript?